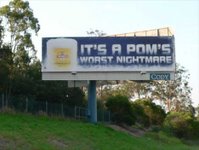 Proving that it’s not just the Germans who lack a sense of humour, a bunch of English expats are trying to have the word Pom banned in Australia.

The so called ‘British People Against Racial Discrimination’ have complained to the Advertising Standards Board about a series of ads for Tooheys Supercold which claim the beer is ‘cold enough to scare a Pom’.

Says Tooheys spokesman Paul Foster, “Supercold is the coldest tap beer on the market in Australia, and given the Poms enthusiasm for warm beer we're just pointing out that they may have issues with it.”

Icing the cake very nicely, Foster went on to say, "Frankly, as a Pom, I'm not the least bit offended."
Stanley Johnson at 10:10 am
Share
‹
›
Home
View web version